TMCF convened over two dozen of its member-school Presidents and Chancellors from our nation’s publicly-supported Historically Black Colleges and Universities (HBCUs) and Predominantly Black Institutions (PBIs) on February 6-7, 2019 in Washington DC.

On day one of the Fly-In, the Presidents and Chancellors began the day attending the Bipartisan Congressional HBCU Caucus Breakfast where Caucus Co-Chair, Congresswoman Alma Adams rolled out the HBCU Caucus agenda and fielded questions from the Presidents and Chancellors on how we can work together to achieve these legislative priorities. The breakfast was also attended by various other Members of Congress, such as Senator Tim Scott and Congressmen Steve Cohen, French Hill and Eric Swalwell. TMCF President & CEO, Dr. Harry L. Williams also hosted a Q & A session with Congresswoman Adams and Congressman Hill focused on how we achieve the legislative priorities that have been set. Following the HBCU Caucus Breakfast, TMCF led a discussion on the ongoing effort to further engage HBCUs in Department of Defense contracting opportunities.

In the afternoon, our Presidents and Chancellors attended Senator Tim Scott and Congressman Mark Walker’s Third Annual HBCU President and Chancellors Fly-In. Senator Scott and Congressman Walker’s programming included presentations from various members of Congress from both the House and Senate and a historic panel of six sitting and former African-American Senators, moderated by Senate Chaplain Barry Black.

Following the Congressional Programming, TMCF hosted a lively and engaging panel discussion on the forthcoming reauthorization of the Higher Education Act with the respective education committee staff members who are charged with drafting the legislation and a briefing on the ASPIRE Act conducted by the Office of Senator Chris Coons.

On day two of the Fly-In, TMCF began its day of programming with a Congressional “Fireside Chat” with Howard University Alumna, Senator Kamala Harris. Programming also included a “State of TMCF Address” by President and CEO Dr. Harry Williams, a presentation on discrimination in higher education bond markets, by Dr. Bill Mayew of the Duke University, Fuqua School of Business, an overview of the 116th Congress, by Dr. James Wallner of American University and a presentation on HBCU engagement by Honeywell International, Inc..

Reps. Walker and Adams and Sens. Coons and Scott Introduce Legislation to Strengthen Partnerships Between HBCUs and Federal Agencies

Bill Would Require Federal Agencies to Report Work With HBCUs

Harris sees sexism in the Senate as a ‘very real issue’

Hover over the slideshow below and use the arrows to browse the photos, or view the whole gallery >> 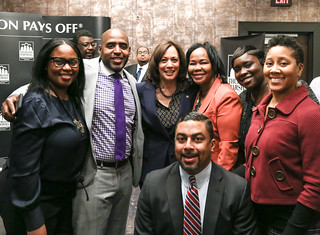 President, Grambling State University​
“I can tell you this third Fly-In has been an incredible success. Looking at the number of members of Congress that came together yesterday, both House and Senate members. As well as having a historic moment with the six living African-American U.S. senators, past and present. You know was something that has never been achieved before and it was only because of the Thurgood Marshall College Fund. To be able to organize and have enough influence to bring all of those individuals together. That’s something that is not very easily accomplished so my hat goes off to Dr. Williams, Mr. Shepard, Burns, and everyone at Thurgood Marshall who played some role in making this event possible. We certainly look forward to this event growing each and every year and the influence of our HBCU’s growing here in Washington.”

Rick Gallot
Chancellor, Elizabeth City State University
“I am delighted to be apart of the HBCU Fly-in here in Washington D.C. sponsored by the Thurgood Marshall College Fund. I am delighted to be able to talk to my colleagues across the country and to really focus on our conversations with congressional staff, in regards to the stability of HBCU’s and how important it is that we build a foundation for the future of our institutions. So I look forward to next year and I know it’s going to be dynamic.”

Dr. Karrie G. Dixon
Chancellor, Southern University Law Center
“It’s been a great time at HBCU Fly-in. I have made very important contacts with members of Congress and other individuals involved in our education space. This is such a wonderful opportunity to get us in front of policy makers and decision makers that can really enhance educational opportunities for our students at HBCUs. I hope we do this for many, many years.”

John K. Pierre
President, Chicago State University
“This has been a wonderful experience! I have so enjoyed the HBCU Fly-In experience learned so much that will benefit my campus in terms of federal advocacy, federal supporters, Senate, and legislators for issues that relate to minority populations and HBCUs. I’m so thrilled that I was able to attend the conference.”